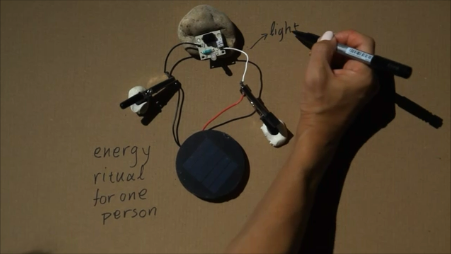 A video essay by Counterpublics (Constantina Theodorou and Giorgos Papadatos), 2022
Part of the research project “ Energy as commons “ consisting by an ongoing theoretical research, an installation, workshop and a video essay, firstly presented in HKW as part of New Alphabet – Commonings 2022.

The video essay, starting from the title reference to the utopian radical practice of Superstudio «12 cautionary tales for Christmas» , explores through a concept mapping the issue of commoning and sharing renewable energy recourses, activates imaginaries about energy sharing rituals, social -spatial implications of energy as a common resource, and raises issues of climate justice, energy communities protocols and governance. Rather drifting through concepts than following a linear narrative structure, “Seven cautionary tales for energy commons” combines short performative actions with, archival footage, text and narration by Elinor Ostrom, Silvia Federici, Ivan Illich, Ashley Dawson and others.

No-one has ever lived in the past. No-one will ever live in the future. The present is
the form of all life.

With this aphorism, the A60 in Jean-Luc Godard's Alphaville epitomizes the supremacy of totalitarian power that occurs through dehistoricization, through the collective loss of the ability to organize the past and the future, through the rupture of being as a historical continuity and a future possibility.
This is how the rule and hegemony are established, in solid modernity, as introduced by Bauman.

Solid modernity excludes potentiality, it envisions only final solutions. Of course in the case of Alphaville the final solution is positive with the triumph of poetry.

In liquid modernity, on the contrary, the present is an intermediate, the shaping of power relations happens through a constant negotiation; it is a constant failure and at the same time a constant pursuit. With this as a starting point, the installation negotiates the concept of the intermediate time-space.

Stages for minor actions is a recent “chapter” of an ongoing project Notes on a Transitional Monument (2012-) launched with a collaboration with Société Réaliste. Its basic conceptual axis explores the constituents of the concept of a monument as a statement of power. It seeks to minimize and undermine them by focusing on the paradoxical relationship of the terms transition-monument.

It is spatially materialized through site-specific installations consisting of fragments, random finds, photographs and texts organized in flexible and unstable modular structures. In each new assemblage of them, the memory of the former is partially reconstructed, as a comment on history, as a continuous construction.

In this version of the project, the "transitional monuments" are stages using the dual meaning of the word in English, (performative platform) and (step of a process). They are accompanied by visual instructions that have the role of incomplete, allusive scores, scripts for possible (or not) action.

The final form of the installations is therefore under negotiation until their final viewing, but also during the exhibition, in an attempt to explore the intermediate space, the transition space that the conflict opens up, which itself constitutes a monument in and of itself that is constantly in the process of becoming.

Notes on a monument to unintentional profoundness 2018


Notes on an outcast monument 2017 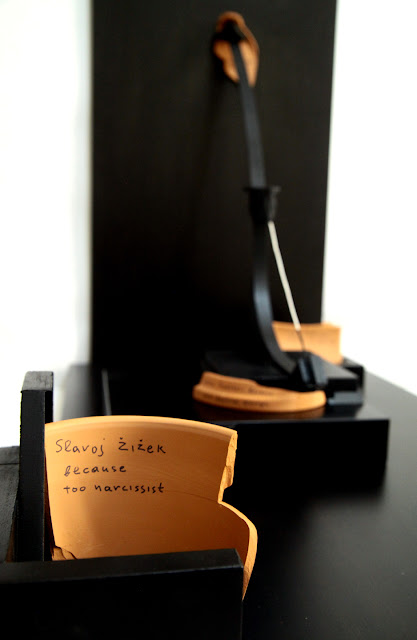 The main conceptual axis in the artistic practice of Giorgos Papadatos is the exploration of the human condition and the ways it is determined by the mix of social and historical institutions.


Papadatos makes a caustic comment on the arbitrary, often contradictory logic behind the concepts of authority, economy, functionality and productivity. Using various media, the artist builds ephemeral structures, undermining and ultimately deconstructing the notion of monumentality and by extension that of authority.


Eschewing all manner of lyrical approach, the form of his installations tends towards rationalism. He does not seek to charge the viewer emotionally. His installations often work as a grid in which space not only interacts but becomes part of the in-situ artistic intervention. In this way his works act as an arbitrary, non-functional and non-habitable platform, demonstrating and censuring the conventions of the concepts under scrutiny, reorganising their forms or creating ecosystems with the potential for intermediary or transitional experiences, social spaces and historical intermissions.


His Transitional monuments series is a project in progress since 2012, consistent in its conceptual field and method of production.


The final form of the artist’s installations often remains negotiable until their final viewing. They have been shown in different versions and thematic approaches that constitute chapters in the same story and adapt themselves to the in-situ circumstances. The comprise photographs, drawings, small sculptures, fragments and adaptable wood structures that operate in a modular way. Texts and aphorisms often convey an ironic, metaphorical mood in the works of Papadatos and are directly linked to historical events by way of critiquing what transpired. A typical example from the series is the Notes for a banished monument, in which the phrases written on shards from vessels make a clear reference to the practice of ostracism in ancient Greece. The work traces the oxymoron in the fact that while contemporary society needs and extols critical thinking as a narrative, at the same time it neutralises and ostracises it as a practical possibility.


Transitional monument for the future (Repubblica di Napoli in grayscale)

The work is an altar-monument (altarino) dedicated to a city-circumstance in which I happened to traverse one of my three youths and to which I have no wish to return.


The monument is aesthetically optimized. Without the baroque realisms which this city deserves (grey is perennially safe and never ludicrous).


And naturally is is transitional and ephemeral like all honest monuments.


It moves between two basic principles.  The text by Paolo Virno The horror of homelands and part of the film Youth by Paolo Sorentino, who is the same age as me, where the double appears of the retired Diego Maradona, a monument of himself, doing soccer practice with time's ball and answering that he belongs not to youth but to the future.


So, then, using as tools the concepts of monument-youth-horror of homelands, with the aid of the deified Diego Maradona and with the help of the small oxymorons which make up our present, the work aspires to function subversively, even ironically, in relation to the concepts of return-memory-homeland- pubescence etc and think of the future which is the homeland of us all.
Giorgos Papadatos, Nice Athens, Feb 2016

Five square meters for all

Notes on a transitional monument

The houses of the guards of water, air, fields etc
( a mausoleum for illuminism )
﻿
﻿
﻿